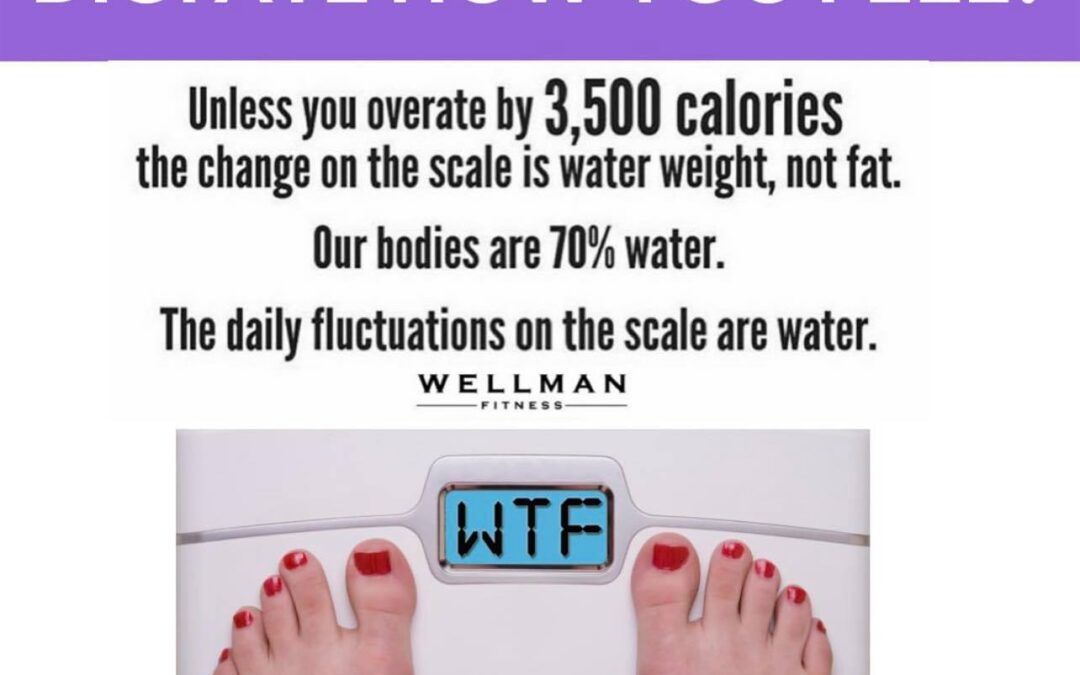 A few reasons you see fluctuations:

👉🏼Recent increase in cardio (increases blood volume). This is a biggie, can add up to 5 lbs in some people, just plasma + new red blood cells, & can cause a month-long stall in scale weight.
👉🏼Recent increase in weight-lifting (sore muscles retain water); eventually there will also be muscle gain, though that is a slower process (weeks)
👉🏼Any soreness, injury or bruising (causes inflammation = local water retention)
👉🏼Change in timing of dinner to a later time than usual, and/or addition of a late night snack even if you ate the same total # of daily calories. The timing alone has an effect. Later eating means that the gut will still be holding “gut water” used in the digestive process during the next morning’s weigh-in. Even a 1 hr later dinner time can affect scale weight the next morning
👉🏼Single unusually large meal within past 5 days – large meals take multiple days to digest, during which not only the meal itself, but also a mass of water equivalent to ~2x the meal’s weight, will all be parked in your gut for digestion.
👉🏼Eating more carbs after a period of not having had many carbs (causes liver & muscles to increase glycogen stores; each 1g of glycogen is structurally packaged with 4g water so you end up with water weight)
👉🏼change in dietary fiber (affects “poop weight”)
👉🏼change in pooping frequency (obvious reasons)
👉🏼Recent exposure to heat (hot yoga, exercising in heat)
👉🏼Menstrual cycle / birth control – about 1/3 of women have noticeable swings in weight during the week before menstruation / week of menstruation.
👉🏼increase in sodium intake

In short, trust your calorie deficit. If you are tracking your food accurately and are really eating at a caloric deficit, there is no way NOT to be losing fat. The fat loss is just hidden on the scale by the fluctuations in water & digestive waste.